Marilyn Yalom’s “A History of The Breast”

Centuries of cultural beliefs, fashions and practices are what Marilyn Yalom examines in her interesting book “A History of the Breast.” Things we don’t even know we know always influence how we feel about our bodies.

Most obviously, breasts represent the power to nurture, soothe, feed and please. There was a time when this was respected, even revered. What happened to that culture? For the most part, the art, poetry and science of breasts come from a male perspective. (Women often weren’t the writers and readers of the culture.) We’ve been learning about breasts from a less than legitimate perspective.

At various times, a woman’s breasts and cleavage were celebrated. At other times, breasts were described as evil, the part of the body to attack first. (This still holds true today). Marilyn Yalom points out how this vacillation of attitudes, from poetic celebration to misogynist fright, happens every forty years or so. Interesting.

As symbols of women’s power, breasts were associated with youth, beauty and fruitfulness though not so fruitful that she actually nursed her babies. It was better for upper class women to not breastfeed, so that their breasts would remain more like the ‘ivory orbs’ of a young maiden. Some of that attitude also persists to this day. (The fact is that every woman’s breasts are affected by gravity and age). Breastfeeding was often relegated to lower class women, with specific guidelines for suitable candidates. There was some small economic power in this. Sometimes, however, it was to the detriment of the wet nurse’s own children. The ‘paying’ baby got priority for food.

The view of lovely young breasts severely limited the maternal aspect of breasts. Yet, a buxom bosom and breastfeeding were, at other times, part of a patriotic image. Honore Daumier’s painting of a “La Republique” of France shows a sturdy woman nursing two children. Liberty and lactation.

A woman’s breasts and curvaceousness, of course, have been ways to gain favor and power with men. Empress Josephine and Napoleon I are one example. In other cultures and times, the cleavage and curves were squelched (or should I say squished?). In her most famous portrait, Queen Elizabeth 1 was depicted in a tight, flattening bodice and high-necked collar. A monarch of great power, it was clearly not by promoting her cleavage.

It surprised me to learn that, after centuries of literally being laced into corsets, the invention of brassieres and undies is relatively new and certainly liberating. Women did die from the constriction of corsets, even some doctors of that era protested their use. Alas, fashion is fickle, and very unkind. No surprise that it was a woman who invented a bra that allowed a more natural shape: a ‘maiden form’. Ironically, there is that image of the maiden breast again. Oh well, at least that’s more comfortable than a torpedo bra!

The deeper attractions to a woman’s breast were discussed in the chapter titled ‘The Psychological Breast”. Freud and his followers ascribed complicated mother fixated dilemmas to newborns and infants. I wondered about this… many of Freud’s clients were upper class and presumably part of that history of wet nursing. Did that influence their confusion about mothering and breastfeeding?

I appreciated Marilyn Yalom’s comparison of Freudian theories with, in my opinion, more realistic feminist theories. I kept thinking of the refrain from the song ‘The Ballad of Sigmund Freud’: “Oh Dr. Freud, Well Dr. Freud, how we wish you had been differently employed…”

Through art, poetry and political action, women speak about their own experiences of nursing, enduring chemotherapy, feeling beautiful or confused, and many more permutations of what it means to be a woman…. not just a person with breasts. (See the review of Florence William’s book.)

This rich history of the breast helps to clarify some misinformation and persistent attitudes. It’s the stories from women and a fuller understanding of women’s bodies that is most important. 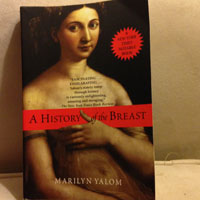