There When You Need Them

When I had my firstborn, I almost immediately noticed there were no other women around me and certainly no other new mothers. It was really lonely.

Then one afternoon, walking up the street, I saw a woman carrying a wee babe just about the same size (and age) as mine, three weeks old. Of course we got to talking. She told me about a local postpartum exercise group. It met weekly and I could just go. Meet more new mothers, just what I needed! Maybe I’d see her there. We parted after that helpful and encouraging exchange.

When I went to the group the next Saturday, the woman I’d met on the street was not there. I met several new mothers and we formed a group that met weekly for two years. But I never saw that first woman at the exercise group or around the neighborhood, even though she lived nearby.

Two years later, I was very pregnant, about 40 weeks, with my second child. I was taking a walk to help encourage contractions. And that afternoon, around the corner from home, I ran into this woman again.
“Hello!” I said “It’s been two years! How are you?”
She said “Well, I think I am pregnant, I just went to get a pregnancy test. How are you? “
“Well, I think I am in early labor.”
We had a friendly chat for awhile and then parted ways.

A week and a half later, my daughter was born and ten days after that, we moved from Chicago to Boston. I haven’t seen that person in twenty eight years. I don’t even remember her name. It’s curious, though, that I should encounter this woman at these two points of my/our lives.

I wonder if we were somehow placed in each other’s path, why our energies intersected for some reason. Maybe it was just a small gift from the Universe. Some people become an enduring connection, and other times, someone is a simple blessing at a certain moment. 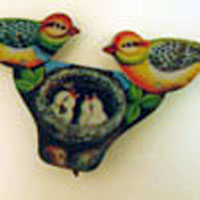