Finding this angel decoration, I remember receiving it as a gift. Given to me in 2009 by my mentor, Kate Reist, CNM, IBCLC when I passed the IBCLC exam. She presented the gift with a card that said “Congratulations. Now you are a Teat Fairy.”

That is what a nurse at the hospital sometimes called Kate, in an amiable manner. We call someone an angel when they help you out, especially at a crucial time. To be angelic is to be caring and kind. Kate was a midwife and IBCLC lactation consultant who kindly offered her time and experience to mentor aspiring LCs like me.

It was a busy hospital where she worked and there were many demands on her. What I saw was how Kate stayed aware of each mother’s moment and helped her in that moment. I remember one visit in particular while I was shadowing Kate on her rounds.

She went to visit a woman for whom breastfeeding that day was difficult. This was the mother’s second baby and she spoke only Haitian Creole. Kate and I went together to her room. The interpreter also arrived, a calm gentleman who stood behind the privacy curtain as he listened and translated.

There could be all sorts of obstacles in that situation. The general impersonality of a hospital, three people she’d never met before, the Woman of Color and the two White women, the language difference, the fatigue and concern of postpartum, etc. etc.

Nonetheless, Kate approached her kindly, attending first to her comfort. She adjusted pillows and the window shades. Had this mother had any breakfast? Had she slept at all recently? Kate learned this woman had easily breastfed her first child but wondered why was it so difficult now.

The interpreter behind the curtain relayed each sentence, Haitian Creole to English, English to Haitian Creole. It was a slow conversation; there were pauses and time for silently figuring something out. When Kate described something in English, she used few words. Though quite soon, Kate would simply pause, make a coo-ing sound, say “aaaaww” and “uh hmmmm”. That was the only language needed. The communication was non-verbal, quiet, slow.

This mother began to relax. Her eyelids got heavier, she leaned back, the baby nuzzled. By the way the baby behaved, and very much by the way the mother behaved, we could see feeding was going well. The mother knew it was okay, too. Kate stayed a little longer, still with minimal talking.

Of all the visits I shadowed and discussed with Kate, that’s the one I remember most. It was a moment facilitated by calm and few words. That’s why Kate was known as the Teat Fairy: a fairy, an angel, a kind and caring person. That is the example I keep in mind. 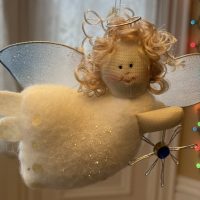